So – I won’t be able to cover every angle of this in one post.

Updates are noted with a new date, blue header font and are placed at the top of the storyline.

At first glance many will think that this is truly a Pope “of the people” who has perhaps realigned priorities to focus on the less fortunate.

I am convinced that his messages – especially when you look at some of the groups he’s encouraging – are intended to encourage a restructuring or reordering of the World Economic Order.

This is class warfare on the international level and I believe the ultimate goal is aimed at what the New World Order (referenced repeatedly by U.S. Politicians and other leaders from Bush Sr to Team-Obama)

When I hear so many high level politicians and other leaders aligned on a this concept of global re-ordering — I am left with no choice but to believe that they are intentional about a plan to re-structure government authority as well as economic structure.

To be as effective as possible; it makes sense to me that those orchestrated changes would be accompanied by some type of spiritual element that attempts to highlight the “goodness” of this emerging New Order.

So it occurs to me that the office of the Pope would be a prime target for allies of this “New World Order” movement. If that group of elite movers and thinkers could get a Pope in place to endorse their ideas – then they’d have a historically powerful movement that combines Marxist revolutionary tactics with the notion that they’re doing “Gods Work”

So, at the conceptual / philosophical level I believe it makes sense that the “office of the Pope” could be compromised by this powerful movement like any other political office.

Taking a closer look at his Pope’s latest missive; I’m more convinced that he’s aligned with the “New World Order” movement and is endorsing active Marxist elements within the U.S.

Here are some quotes from his letter:

Pope Francis has offered his unequivocal support to grassroots organisers and activists who are fighting for social justice, migrants, and environmentalism, saying he “reaffirms” their choice to fight against tyranny amid a “gutting of democracies”.

The lack of specificity from someone as intelligent as this man is concerning.

The “grassroots / social justice” movements afoot in the U.S. – at least as our media would portray them – include groups like Black Lives Matter and others. These are organizations that can be unequivocally proven to be Marxist in nature and purposely deceptive in terms of how their titles are not fully aligned with their ultimate goals.

Rather than defend the ideas of borders and national sovereignty, this Pope provide ambiguous support for “migrants” who are supposedly fighting “tyranny”.

So, without additional clarification (and I believe his statement was purposely vague) I am left with no recourse but to assume he’s backing any and all groups that are calling for unfettered access into the U.S. and direct support from The State once they’re here.

After all, that’s what the “grassroots” organizations like La Raza and Black Lives Matter are all demanding (which happens to align with Soros-ian strategy). They are using traditional Marxist agitation to obtain POPULIST support for their economic and political goals. 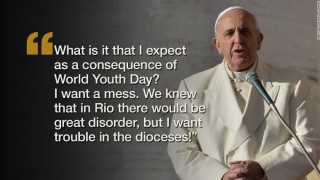 There can only be on CERTAIN result from a strategic shift of that nature — and in my opinion that would be economic bankruptcy of the United States and the subsequent end  of the use of the U.S. Dollar as the international medium of exchange.

Don’t get me wrong – it’s not a prideful point of view that leads me to the conclusion that this would be a disaster.

I am convinced that the economic destruction of the U.S. will bring about a much more dangerous historical era where the aforementioned “New World Order” emerges as an attempt to form a Marxist World Government.

And government on that level is about an unaccountable and prone to corruption as possible. Finally, once corrupted – their power would be virtually limitless and reversing the power structure would be nearly impossible.

So I see the Pope’s statements as addressing structure, movement and “Political Alchemy” on several levels.

His repeated scorn of “populist” movements strikes me as particularly hypocritical as well – here’s an example from his recent letter (another is shown in my original post below):

In the letter, Francis condemned the growth of populist and xenophobic movements around the world, saying they posed a “grave danger for humanity”.

There’s rich irony in the Pope condemning the Democratic / Populist movement that elects a President who OPPOSES Globalists …. while that same Pope backs the POPULIST movement of entities that are calling for the reversal of this legal / democratic decision

The current Pope is a lot like politicians who want to denounce gun ownership for the average citizen. While they surround themselves with protectors who carry guns.

He denounces borders and (apparently) any type of system that would require criteria for legal admission into a country — while he sits behind medieval stone walls and fences of iron in his holy Vatican.

The Pope is a Marxist and a Fraud

Have a nice day.

Here are a couple of other links for additional context:

An Objective Look from “Catholic.org” 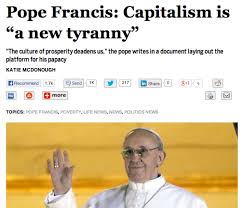 I hope my Catholic friends understand that this criticism is made with the same objectivity and honesty that I would make on anyone else. No offense is intended to anyone’s closely held religious beliefs.

However — the Pope is a Marxist and a fraud.

Aside from his constant “wealth redistribution” speeches he’s also taken other Theological stances that I believe are more Socialist than Christian but I will not tackle those just yet.

Most recently he’s jumped on the bandwagon of:

a) Warning us about the dangers of electing someone like Trump (does anyone recall similar warnings from him regarding the last one we had? The one that supported selling baby parts for a profit and really seems to love Communists and arming “MODERATE” Muslims)

so let’s quickly take a look at this article and closely consider a few lines one at a time:

He’s using his one populist rhetoric to incite and agitate from his trusted position — he’s a member of the”New World Order” crowd and a complete FRAUD.

This is way to early to feel this revolted by someone –

At some point you have to decide that you’ve had enough of being told what to think and how supporting Independence and National Sovereignty is bad.

……and have a nice day while you’re at it