Why do the hard left and Marxists insist on attacking the “traditional” family structure?

Why can’t they promote their version of “social justice” in a manner that encourages co-existence of differing viewpoints on this subject?

The short answer is that tolerance with the ‘traditional’ worldview of the stability provided by family units — doesn’t align with their goals.

They’re seeking a Marxist revolution of society here in the United States…..hardly anyone  in this country knows what that means and why it’s so incredibly dangerous.

But if you ask one of their contemporary ‘social justice’ warriors – they’ll quickly tell you some version of the original Communist spiel (even if they have no idea that’s where it originates) …..that they’re marching for changes that relate to …. justice and equality and an end to that Dreaded Patriarchal Society……

But what can we learn from history?

Here are some words from Friedrich Engels to provide insight into the Communist stance on “family”:

The struggle for women changed with the patriarchal family and even more with the monogamous individual family. The [relationships] lost their public character and became private service. The wife became the first domestic servant…

So — think about this

Communists frequently / openly acknowledged that the traditional family unit was THE basis for the structure of society…..and in a nutshell…..

THAT’S why it’s under attack

They want to tear down the existing structure of society completely and replace it with a Powerfully Centralized Political Entity that allows NO ROOM for dissent and operates at the desire of the empowered Intelligentsia — JUST like Soviet Russia. 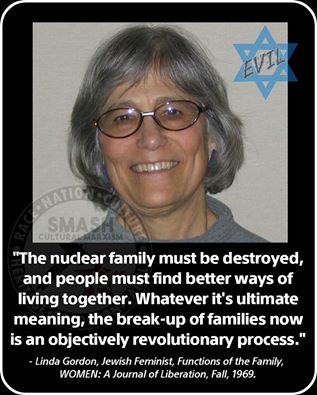 The Intelligentsia leading the hard left doesn’t care MORE about whether a boy kisses a boy or a girl kisses a girl – their intentions ultimately — are ECONOMIC in nature and HOW can they promote justice when — from the very start – Marxism makes it clear that there’s so such thing as “guilt”, “innocence”, or any other kind of right / wrong???

Don’t fall for this!

In the U.S. – the Marxists and Communists have long since learned to use RACE and SEXUAL IDENTITY as vanguard political groups to attack CAPITALISM and our social structure.

Do you SEE it yet?